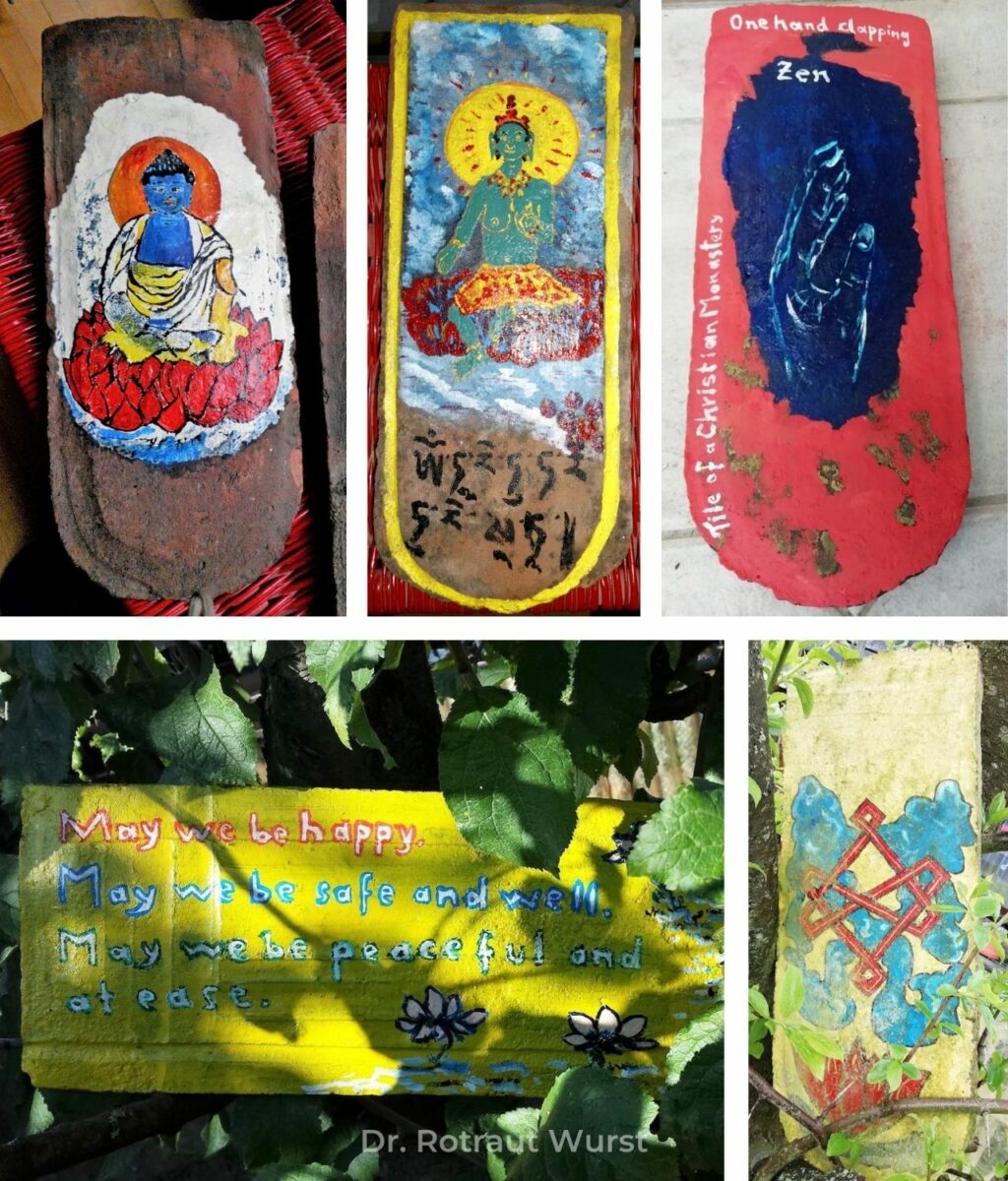 These five roof tiles come from a Christian monastery or, more precisely: a Cistercian monastery 1 The order was founded by Bernard of Clairvaux. It emerged from the Benedictine Order. Important were praying, working, and reading .

During a vacation with my parents in Bad Herrenalb (Black Forest) – I was still a child -, we passed that monastery on a walk. The old roof tiles were taken down to renew the roofing of the monastery. My father immediately had ideas on how to paint them, so he asked the verger if he could get some before they would be thrown away. What he wants to do with them, she asked. Paint them, he said. With what? With the family crest and various municipal coat of arms. She agreed that he could choose tiles if she could get one from Bad Herrenalb.

I inherited some unpainted tiles and painted Buddhist themes on these five tiles from a Christian monastery. That way, a Buddhist-Christian dialog is created. I was inspired by roof tiles with Buddhist subjects on a nunnery I had seen at a conference in South Korea. 2 2004, see: Collaborations with Sakyadhita, the international Buddhist women’s network

The first three tiles were created in 2018: The Buddha in blue, the green Tara (a Buddha in female form), and “May we …” (The metta (Pali) meditation).

The Buddha is painted in blue because he represents the Medicine Buddha. He is supposed to help not only against uncertainty but also against sickness.

The green Tara is one of the female figures that’s especially famous in Tibet. According to a legend, she was a princess that made a vow to attain Buddhahood – the awakening – in a women’s body. That was unusual because, in Buddhist texts, there is often the idea that a woman must first have a rebirth as a man to become a Buddha. This green Tara is a Tibetan Buddhist feminist who became a Buddha, but there’s more: Out of compassion for all living beings, she stays in the circle of existence to teach them how to attain Buddhahood. She is the protective deity of Tibet.

The fourth tile is called “One Hand Clapping“. This is a Zen Koan, a sentence or story that as a task can be solved only between master and student. It’s not about rational answers. Whoever receives a Koan in Janapese Buddhism must learn to grow beyond their intellect to achieve a kind of “enlightenment”.

The next tile that belongs to the series Buddha on the monastery roof pictures one of the eight Tibetian-Buddhist symbols of luck: the endless knot. It represents the unity of wisdom and method that only together lead to the state of Buddhahood. Everything is connected. This is the principle of cause and effect, actio et reactio in physics.
The path to enlightenment leads through samsara. The right and ethical handling of difficulties in life, the wisdom to accept life as it is, and its use of the method through thought, speech, and action in mindfulness: This is the path to Buddhahood.