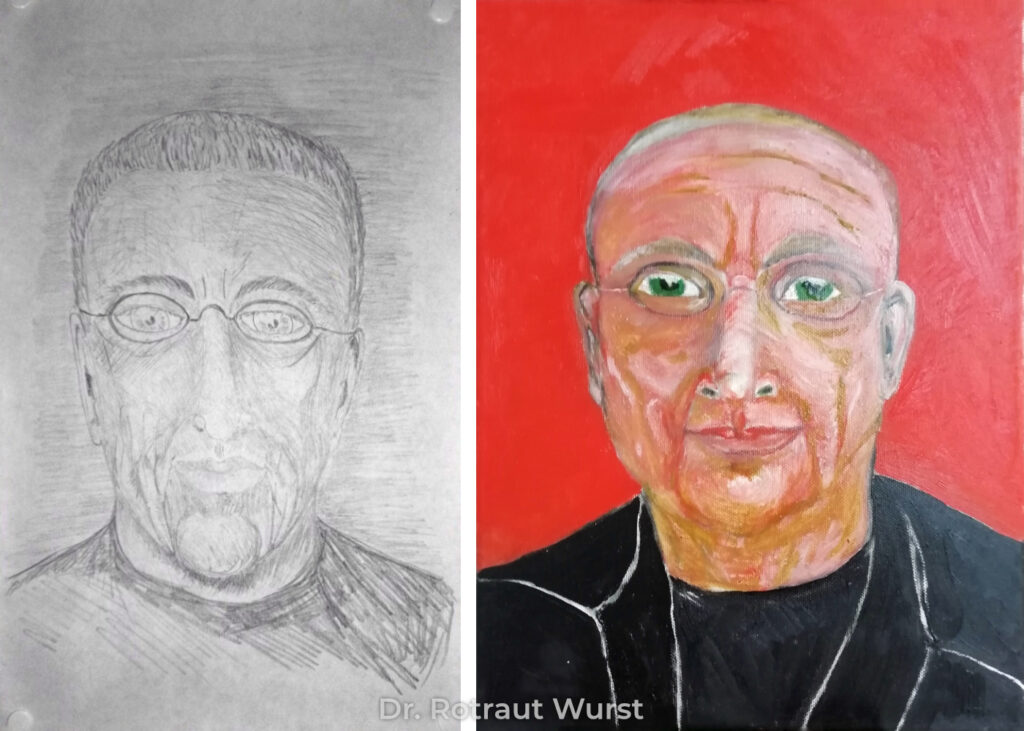 This drawing was created at the end of March of 2017.

Since the diagnosis in 2015, my wife passed away in a slow, painful, and excruciating way. This process of dying went on until the beginning of August 2017. At some point, I could not care for her at home and work at the same time. Eventually, the situation got worse to a point where I couldn’t work anymore and had to sign myself off work. I felt helpless.

Early on, we felt left alone by doctors and the hospital.

She was well cared for in the nursing home, but I visited her every morning and afternoon. I didn’t want to leave her by herself. Most of the time, she wasn’t aware anymore. Simultaneously, I cared for our dog. I felt like I was dissolving.

Under these circumstances, this work came into being. Painting and drawing were what helped me to process the situation. It helped me to stay strong for my wife and our Dober-woman. During that time, our dog grew from a puppy to a pubescent Dober-woman, while she was having a hard time that it wasn’t our family of three at home anymore.

According to Buddhist philosophy, a ‘self’ does not exist. Nevertheless, we talk about ‘me’, ‘you’ or ‘others’. However, Buddhism merely denies the commonly accepted view of the self: inherently existing, independent, and consistent.

Following the Buddhist belief, this self does not exist because it is connected with everything and constantly changing. It depends on reasons, circumstances, and our own thinking, actions, and talking.

Science agrees by now that the body or its cells are constantly renewing until the body passes and the transformation to something new begins.

Getting closer to this non-inherently existing, dependent, and unsteady self is difficult. The only chance is an approach.